On March 14, 2022 at approximately 9:40PM two Transit Police officers were patrolling the MBTA's Downtown Crossing station when they encountered a male, later identified as Picasso Saint-Fleur, 27 of Boston. Saint-Fleur was blocking an emergency exit near the Summer Street concourse. Officers engaged Saint-Fleur in conversation advising him he was blocking the exit. Saint-Fleur became very anxious and began acting in an erratic manner. Officers ultimately discovered a loaded Sig Sauer P320 9mm hand gun from Saint-Fleur's possession. Saint-Fleur does not have a License to Carry a firearm.

Saint-Fleur was placed into custody and transported to TPD HQ for the arrest booking process. 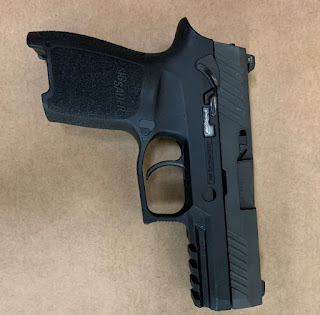 media inquiries should be directed to Superintendent Richard Sullivan at rsullivan@mbta.com  the events listed above are allegations; All defendants are presumed innocent until and unless proven gu
ilty beyond a reasonable doubt
Posted by MBTA Transit Police at 1:19 PM