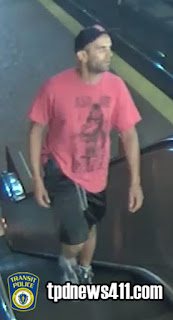 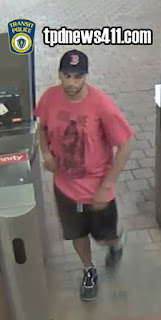 The subject depicted above is wanted for questioning regarding an assault with a dangerous weapon, possibly a firearm. The incident occurred on an Orange Line train at Tufts Medical Center MBTA Station on Tuesday, July 26, 2016, at approximately 9:37 PM.

The subject is described as follows:
White or Hispanic male, approximately 25 to 30 years of age, medium build, approximately 5’10” in height. The subject wore a red tee shirt with the words “Ask Me” printed on the front, black shorts, black sneakers, and a Boston Red Sox hat.

TPD Statement by Supt. Richard Sullivan:
Upon learning of an incident regarding an interaction between Transit Police officers and a group of young people that was posted and widely distributed on social media we took immediate steps to ascertain what transpired. Thus far I have reviewed public safety cameras, audio tapes and spoke with MBTA employees as well as the MBTA passenger who raised the matter.  My preliminary findings suggest our officers conducted themselves in a calm and professional demeanor. We take great pride in the men and women of the Transit Police Department. The  cornerstone of our philosophy is Community Policing in the truest, purest sense of the word. Our officers are trained to diffuse situations not exacerbate them.

Again, my preliminary findings suggest TPD officers requested a disorderly group of young people exit from the train with the understanding and explicit directions they would be allowed to board the next southbound train. The group of young people agreed to this solution/outcome and disembarked without further incident. There was another young male, who was seated in close proximity to the group,  who was also asked to exit the train. Once off of the train, this male explained he was NOT with and/or associated with the group. This was confirmed by the larger group as well as an independent passenger. At this point the young male was allowed back on the train and continued about his business.
TPD has also communicated with the young male's mother. We are continuing to look into this matter and are committed to serving our riding public with the utmost dignity and respect.

media inquiries should be directed to Superintendent Sullivan at rsullivan@mbta.com
Posted by MBTA Transit Police at 7:09 PM

On July 17, 2016 at approximately 10PM a Transit Police officer assigned to the North District received a radio call to respond to the Kendall Sq. MBTA station to investigate a possible assault. Upon arrival the officer met with the victim's mother who informed the officer that while travelling on an MBTA bus enroute to Kendall Sq. her thirteen (13) year old daughter was indecently assaulted. The victim's mother further informed the officer the perpetrator had just entered the Kendall MBTA station. The officer immediately proceeded to the platform area and located the offending male, later identified as Yunior Mayorga-Galvez, 21, of Somerville. Mayorga-Galvez was positively identified by witnesses present and placed into custody for Indecent Assault & Battery on a Person under 14. Mayorga-Galvez was transported to Transit Police HQ for the arrest booking process and it is expected he will be arraigned sometime today in Cambridge District Court.

tpdnews.
Posted by MBTA Transit Police at 10:00 AM