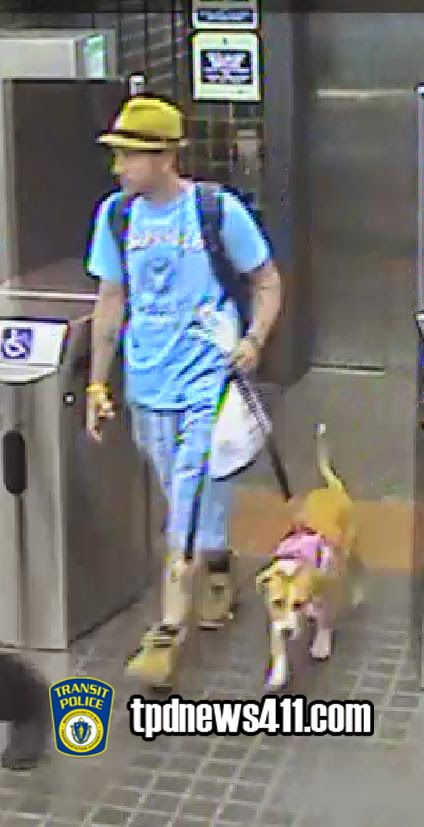 On May 29, 2014 at approximately 6:15 PM Transit Police officers working in Area 1 were conducting Point of Entry Policing at the MBTA's Park Street Station. While there officers observed a male, later identified as Christopher Cardalino, 30 of Somerville,  enter through the fare gates without paying. Cardalino, who was also in the company of his dog, "piggybacked" in behind a paying customer.  Officers approached Cardalino for the purpose of issuing a citation. Upon approach of the officers Cardalino became nervous and when asked for some form of identification Cardalino dropped the leash for his dog and took off running. The dog, possibly abandoned and appearing confused, also ran in the direction of Cardalino. Officers caught up to Cardalino as he was fleeing through the exit gates on the Winter Street side and wrestled him to the ground. Subsequent to an investigation officers discovered there were several warrants in existence for Cardalino's arrest. The warrants for Cardalino were as follows: Somerville District Court for Operating a Motor Vehicle on a Suspended License, Failure to Stop, Operating a Uninsured and Unregistered MV, Chelsea District Court for Operating a MV on a Suspended License and Failure to Yield, Chelsea District Court for Uttering a False Prescription and Possession of a Controlled Class C & B substance and Quincy District Court for Operating a MV with a Suspended License and Operator Failure to Identify self.

Cardalino was placed into custody and transported to Transit Police HQ for the arrest booking process. The dog was NOT injured during the incident and was turned over to a person the dog is familiar with.