On February 28, 2018 at approximately 4:45PM a female victim boarded a Red Line train at Broadway Station. As the train travelled southbound and was approaching North Quincy Station the victim noticed a male, later identified as Taurek Dugha, 36, of Quincy committing a lewd act and Indecently Assaulting her simultaneously. The victim immediately separated herself from Dugha and a witness took Duogha's picture with her cellular telephone. The TPD was notified and several officers assigned to the South District responded and placed Dougha into custody for Indecent Assault & Battery and Lewd Wanton & Lascivious Behavior. 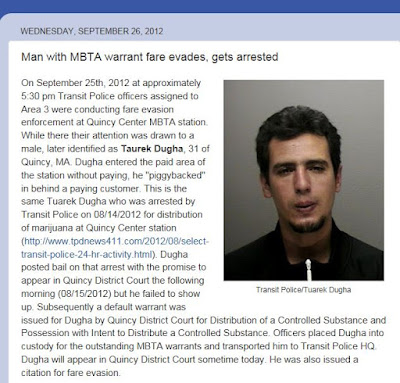 
the events listed above are allegations; All defendants are presumed innocent until and unless proven guilty beyond a reasonable doubt
Posted by MBTA Transit Police at 3:03 PM