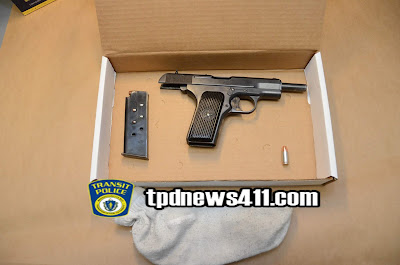 On October 23, 2018 at approximately 2:30pm multiple Transit Police officers assigned to the South District as well officers assigned to the TPD's Juvenile Services Section were monitoring the school break at the MBTA's Forest Hills station. While there officers had their attention drawn to a male, later identified as Isaiah James, 20, of Dorchester. Officers approached James and attempted to engage him in conversation based on this encounter, their observations and other contributing factors officers believed James was illegally possessing a firearm. Ultimately James was found to be in possession of a fully loaded 9 millimeter firearm secreted within his pant leg. James was also in possession of several hundred dollars of counterfeit US Currency.

James was placed into custody and transported to TPD HQ for the arrest booking process.