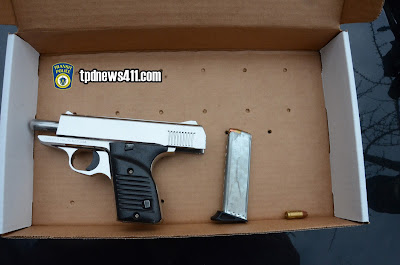 On April 13, 2018 at approximately 2:30PM Transit Police officers assigned to the South District along with TPD detectives assigned to the Department's Juvenile Services Section were at the MBTA's Forest Hills station monitoring a school break. While there they had their attention drawn to a male, later identified as James Chin, 22, of Mattapan. Chin was observed exhibiting signs of a person who potentially was carrying a firearm. Upon noticing the officers Chin fled, in doing so a fully loaded .380 caliber firearm he was illegally carrying dislodged from his waistband and landed in the middle of the bus way. At this time an acquaintance of Chin's, Nina Vidal, 18, of Mattapan ran to the firearm and took possession of it. Officers quickly converged and shouted verbal commands for Vidal to drop the weapon. Vidal ultimately complied and was placed into custody. After a foot pursuit officers also apprehended Chin and he also was placed into custody.


the events listed above are allegations; All defendants are presumed innocent until and unless proven guilty beyond a reasonable doubt
Posted by MBTA Transit Police at 11:17 AM