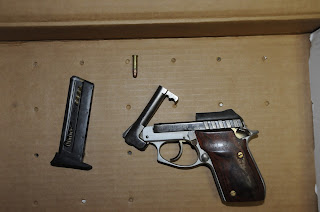 On October 10, 2017 at approximately 5:30PM members of the TPD's Crime Suppression Team were at the MBTA's Haymarket Station conducting Point of Entry Policing when their attention was drawn to a male later identified as Rosba Taylor, 25, of Lynn. Taylor fare evaded by piggybacking in behind a paying customer. Officers approached Taylor for the purpose of issuing a citation. Taylor provided the officers with a false name and date of birth. When the officers informed Taylor the name provided did not match Taylor then offered a another fictitious name. Ultimately officers informed Taylor he was under arrest for failing to identify himself. As the officers attempted to take control of Taylor he began to shift his body away from the officers. Ultimately Taylor was placed in custody and officers recovered a fully loaded with one in the chamber .22 caliber handgun from his waistband.

Taylor was placed into custody and transported to TPD HQ for the arrest booking process.


During the booking process Taylor was found to be in possession of what the officers believed to be crack cocaine.

the events listed above are allegations; All defendants are presumed innocent until and unless proven guilty beyond a reasonable doubt
Posted by MBTA Transit Police at 11:36 AM