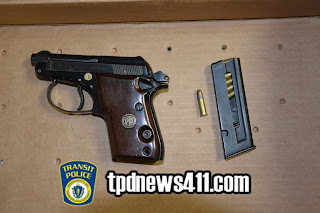 On February 22, 2017 at approximately 7pm members of the Transit Police Crime Suppression Team were conducting Point of Entry Policing at the MBTA's Mass. Ave station. While there they had their attention drawn to a male juvenile, 17, of Quincy who entered through the fare gates without paying his fare. Officers approached the male juvenile for the purposes of issuing a citation. Based on the juvenile's behavior and suspicious movements a further inquiry was conducted which revealed the juvenile was in possession of a .22 caliber semi automatic handgun with 7 rounds in the magazine and one round chambered.

The juvenile male was placed into custody for Illegal Possession of a Firearm/Ammunition and transported to Transit Police HQ for the arrest booking process.