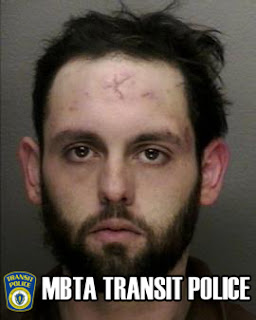 On April 5, 2016 at approximately 6:45pm Transit Police officers assigned to the Central District were conducting Point of Entry Policing at the MBTA's Back Bay Station. Officers had their attention drawn to a male, later identified as Michael Nalbantian, 29, of Boston. Nalbantian was loitering in the entrance to the station and appeared to be stuffing marijuana into a cigarette. Officers approached and subsequently discovered there were several warrants in existence for Nalbantian's arrest issued out of Boston Municipal Court for: Wanton Destruction of Property, A&B to Intimidate w/Bodily Injury, Armed Robbery and two Counts of Civil Rights Violations. Nalbantian was placed into custody and transported to TPD HQ for the arrest booking process. During this process officers located marijuana in Nalbantian's cigarette.