BOSTON, Oct. 2, 2014—A Chicago man was sentenced to a year behind bars and must pay restitution to the MBTA after he was convicted yesterday of more than a dozen counts of vandalism targeting MBTA property, Suffolk County District Attorney Daniel F. Conley said. 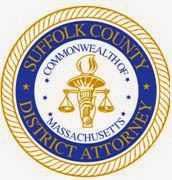 A Brighton Municipal Court jury yesterday convicted JOHN BIESIOT (D.O.B. 6/17/78) of 15 counts of vandalism in the three tagging incidents, which occurred in 2008 and 2010 at Codman Yard in Dorchester, Reservoir Yard in Brighton, and Alewife in Cambridge.  He was found not guilty of vandalism charges stemming from additional incidents at Forest Hills and Orient Heights stations. Though the incidents occurred in various locations in Boston and surrounding cities, the cases were joined and tried together in Brighton court.


“This was a massive vandalism spree that carried massive cleanup costs,” Conley said. “The jury clearly recognized its scale and scope.” The Suffolk County convictions are only the latest for Biesiot, who has faced similar charges in Arkansas, California, Illinois, Minnesota, Missouri, and North Carolina in cases dating back to 1996.


In light of Biesoit’s record and the extent of the damages, Special Assistant District Attorney Mychii Snape recommended that Biesiot be sentenced to 18 months in the house of correction, with one year to serve and the remainder suspended for a period of two years, as well as an additional two years of probation.  She also requested that Biesiot be ordered to pay restitution or a $1,500 fine for each of the 15 counts of vandalism for which he was convicted.


Judge David Donnelly imposed a sentence of one year and one day in the house of correction, followed by a 90-day sentence, which is to be suspended for a three year period, and an additional three years of probation.  While on probation, Biesiot must have no contact with other members of the Dirty 30 graffiti crew, not use any type of spraying, painting, or marking device outside of work purposes, and may not knowingly be within 50 yards of anyone using such a device.


A hearing will be held on Oct. 29 to determine the amount of restitution Biesiot must pay.


Snape presented evidence and testimony to prove that, beginning in 2007, Boston and Transit Police began to see an increase in vandalism attributed to the graffiti crew known as “Dirty 30.” Through an extensive investigation and communication with law enforcement agencies across the country, Biesiot was identified as a member of that group who used the tag name “WYSE.”


On Jan. 12, 2008, MBTA employees at Reservoir Yard in Brookline discovered 12 Green Line trolleys, a retaining wall, and a signal box had all been vandalized with graffiti, including the tag “D-30” in multiple locations.  Three months later, on March 16, Biesiot’s tag name was discovered among the graffiti spray painted along one full side of a train at Codman Yard in Dorchester.


On March 15, 2010, an MBTA motorman performing overnight work on a train at Alewife observed two men – one of whom was later identified as Biesiot – spray painting two trains.  He remained hidden and called Transit Police.  Biesiot and the other man made their escape through an emergency exit prior to the arrival of officers, but the worker was able to identify Biesiot.


The graffiti at Alewife also included references to the Dirty 30.


Officers obtained a warrant to search a Brighton residence where Biesiot was believed to be staying in 2010 and discovered a canister that had been tagged with Biesiot’s tag name.  Warrants for Biesiot’s arrest issued that same year.


“The defacing of public property is not a victimless crime; it costs taxpayers money and diverts resources away from the rest of the MBTA system, from cleaners to Police,” said Transit Police Chief Paul MacMillan.  “I’m glad to see yesterday’s verdicts against this repeat offender and hope that it serves as warning to those who try and perpetrate crimes in the MBTA system that they will be caught and prosecuted to the fullest extent of the law.”


Biesiot was represented by attorney William Keefe.  He will return to court Oct. 29 for a restitution hearing.
Media inquiries should be directed to rsullivan@mbta.com
tpdnews.