On June 15, 2022 at approximately 10:20PM Transit Police officers assigned to the South District received a radio call to respond to the MBTA's Ruggles Station for a report of an unknown male allegedly armed with a firearm. Upon arrival Transit Police officers conducted an area search along with Boston Police officers who were searching the area surrounding the station. Shortly thereafter officers located a female victim inside Ruggles Station who relayed her domestic partner assaulted her and then threatened her with a firearm. The male subject fled the area.

On June 16, 2022 at approximately 12:20PM an observant Transit Police officer while patrolling Nubian Sq. Station spotted the assailant from the previous evening at the corner of Washington and Roxbury Street's. The officer along with several other TPD officers approached the male, identified as Lejuan Evans, 41, of Providence, RI. Evans was subsequently found to be in possession of a Glock 9mm handgun with a laser sight attached. The firearm contained a loaded high capacity magazine and a round in the chamber. Evans, who is not properly licensed to possess a firearm, was placed into custody without incident and transported to TPD HQ for the arrest booking process. 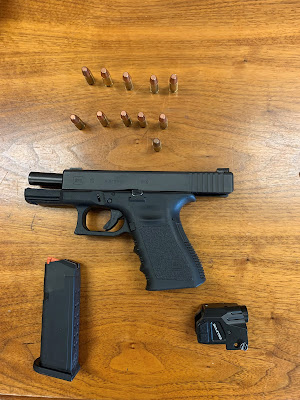 Posted by MBTA Transit Police at 11:06 AM