On January 2, 2022 at approximately 8:51PM Transit Police officers assigned to the Central District received a radio call to check on the well being of a highly intoxicated male at the MBTA's Tuft's Medical Center Station. Upon arrival officers located the male in question, later identified as Manuel Peters, 58, who listed a homeless shelter in Boston as a residence. Peters displayed signs of extreme inebriation and officers subsequently determined Peters was armed with a fully loaded 32 caliber handgun. Officers quickly and safely took control of the weapon from Peters. Peters does not have a License to Carry said firearm and was placed into custody for multiple firearm related charges. During the booking process at TPD HQ it was discovered there were several warrants in existence for Peters' arrest issued out of various courts for multiple charges to include Assault & Battery on a Disabled Person, Breaking and Entering a Building at Nighttime, Receiving Stolen Property, Destruction of Property and Resisting Arrest. 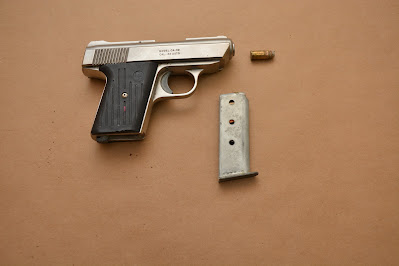 media inquiries should be directed to Superintendent Richard Sullivan at rsullivan@mbta.com  the events listed above are allegations; All defendants are presumed innocent until and unless proven guilty beyond a reasonable doubt
Posted by MBTA Transit Police at 7:07 PM