On December 21, 2017 at approximately 6:15pm a female reported to the TPD she was a victim of a larceny. The victim went on to state while waiting for her train at the Downtown Crossing Red Line platform a male feigned bumping into her and stole her wallet from her purse. The victim immediately was aware of what happened however the offending male made good his exit. Due to the offending male's facial tattoos the victim was able to provide a detailed description. 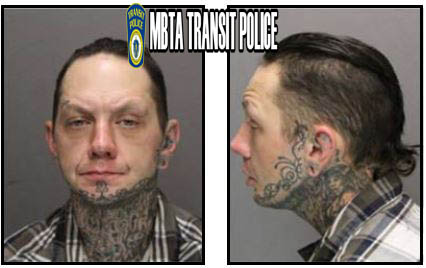 Subsequent to a thorough investigation by Transit Police detectives, Nikia Eddings, 36, of Boston was identified as the subject responsible for the theft. TPD detectives obtained an arrest warrant from Boston Municipal Court-Central Division for Eddings arrest.


On May 3, 2018 at approximately 8AM an eagled eyed Transit Police crime analyst observed who he believed was Eddings sitting at a bus stop inside the South Bay Mall, Dorchester. The analyst notified TPD operations and responding officers confirmed Eddings identity and placed him into custody. Eddings was transported to TPD HQ for the arrest booking process.

the events listed above are allegations; All defendants are presumed innocent until and unless proven guilty beyond a reasonable doubt
Posted by MBTA Transit Police at 12:46 PM