Man assaults US Postal Carrier-Do you know him ?

Transit Police detectives are seeking the identity of the male subject depicted within, if you know the whereabouts or identity of this individual please contact our Criminal Investigation Unit at 617-222-1050 or you can always send us an anonymous tip (24 hrs a day) to our text tip line 873873.

On Wednesday, July 10, 2013, at 6:40 pm, the subject depicted below assaulted a U.S. Mailman while in uniform on the Orange Line platform of Downtown Crossing MBTA Station. The Victim was entering through the fare gates when the subject below attempted to "piggyback' in behind. The victim refused to allow the subject to "piggyback" in behind him. The subject eventually fare evaded in behind another patron. Once inside the paid area the assailnat struck the victim in his face several times. Victim transported to MGH for treatment. 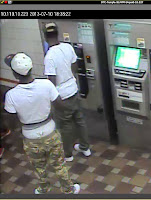 media inquiries should be directed to tpdnews@mbta.com
tpdnews.


The events listed above are allegations; All defendants are presumed innocent until and unless proven guilty beyond a reasonable doubt.
Posted by MBTA Transit Police at 9:27 AM