On November 15, 2022 at approximately 5:20PM a 24 year old male victim was walking just outside the East Boston Memorial Stadium when he was approached and stopped by 3 males. One of the males later identified as Ja'Kye Lucas, 18, of East Boston allegedly placed a firearm into the victim's stomach and demanded "everything" the victim had. The victim proceeded to hand over his iPhone and wallet containing cash and credit cards. Upon completion of the robbery the suspects fled into the MBTA's Airport Station. 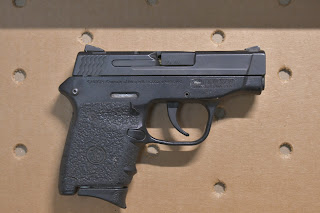 The victim gave chase and observed a black firearm fall the waistband area of Lucas near the station's elevator. Lucas and the victim struggled on the outbound platform and Lucas was able to flee again exiting towards the station's parking lot. Once in the parking lot the victim and an MBTA employee detained Lucas until arrival of the TPD. TPD officers were able to locate the firearm used, a Smith & Wesson Bodyguard 380 Auto with 5 rounds in the magazine and 1 in the chamber. The firearm was recovered in the mezzanine area by the elevator. Lucas was positively identified, placed into custody for Armed Robbery, Unlawful Possession of a Firearm and Unlawful Possession of Ammunition and transported to TPD HQ for the arrest booking process. (The two other suspects were able to make good their escape.)

Posted by MBTA Transit Police at 11:10 AM