Weymouth man arrested for Illegal Possession of a Firearm.

On May 22, 2020 at approximately 9AM Transit Police officers on a detail assignment at the MBTA's Maverick Sq. station were approached by a male who informed them he was just assaulted by an unknown male armed with a firearm. The victim went on to state his assailant, later identified as Elijah Messier,20, of Weymouth asked him to borrow a lighter. When the victim declined Messier became angry and removed a firearm from his person and pointed it at the victim. The victim provided a description of Messier and officers observed Messier on the escalator. Messier attempted to flee and briefly was out of view of the officers. Officers were able to detain Messier and a firearm was located under a MBTA information sign in close proximity to Messier.

Messier was positively identified by the victim and was placed into custody and transported to TPD HQ for the arrest booking process. During this process officers discovered Messier was in possession of what the officers believed to be Heroin. Messier will be charged with Possession of a Firearm W/out a License and Possession w/Intent to Distribute a Class A Substance and Armed Assault. 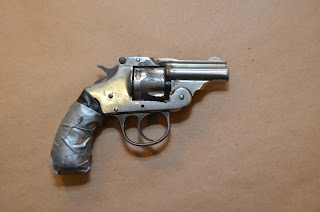 Posted by MBTA Transit Police at 8:11 AM