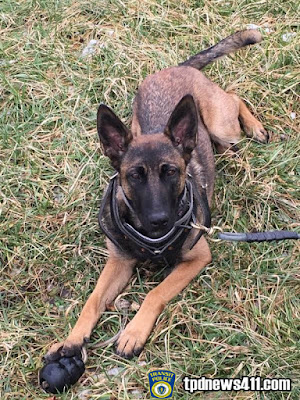 On December 12, 2018 at approximately 9:25PM Dimitri Lawson, 21, of Dorchester entered an eating establishment located in the Fields Corner section of Dorchester. Lawson walked behind the counter and struck the employee in the face and began to force open the cash register. At this time a patron who was present ran outside and flagged down a passing Transit Police officer and informed him of the robbery in progress.  The Transit Police officer and his K9 partner Molly immediately proceeded to the establishment. The TPD officer and Molly entered the store were others pointed out Lawson. Lawson was standing at the counter over a broken cash register. The officer gave commands to Lawson who refused to comply and exhibited signs he would assault the officer. The officer warned Lawson if he continued his aggression and refuse to comply with lawful commands he would release Molly. Lawson challenged the officer to "Send it to me" (referring to Molly) and advanced forward in an aggressive manner towards the officer. Molly was released. Lawson with a closed fist struck Molly in her head. Molly undeterred continued to engaged Lawson and attempted to subdue his aggression. Ultimately Molly, her handler and two Boston Police officers placed Lawson into custody.

Lawson was transported to TPD HQ for the arrest booking process. During this process it was discovered several warrants for Lawson's arrest were in existence issued from Dorchester District Court for Breaking & Entering 2 counts, Assault & Battery with a Dangerous Weapon and Resisting Arrest