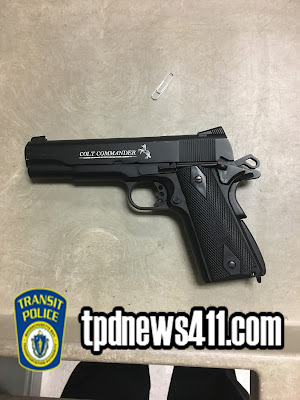 On July 30, 2017 at approximately 1:15PM Transit Police officers assigned to the South District were on patrol at the MBTA's Forest Hills station when they received a radio call to respond to the lower bus way for a report of a man with a gun. Upon arrival officers observed a male fitting the description enter onto an MBTA bus. Officers boarded and approached the male, later identified as Fernando Villalona, 20, of Roxbury and immediately observed what they believed to be a firearm in the rear waistline of Villalona. Officers discovered the firearm was a replica and there was a warrant for Villona's arrest issued from West Roxbury District Court for Trespassing.


Villalona was placed into custody and transported to Transit Police HQ for the arrest booking process.