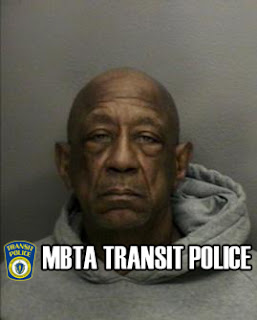 On January 11, 2017 at approximately 7:30pm plainclothes Transit Police officers assigned to the Department's Crime Suppression Team were travelling on a inbound Blue Line train. During this time their attention was drawn to a male, later identified as Geronimo Alomar , 67, of Boston. Geronimo was engaged in conversation with another male passenger however the officers noticed he was attempting to conceal a glassine bag in his hand containing what the officers believed to be cocaine.

Alomar exited at the MBTA's State Street station where he was approached by the officers. Subsequent to an investigation Alomar was found to be in possession of approximately 56 grams of Cocaine and Suboxine strips for which he did not possess a prescription. Alomar was placed into custody and transported to Transit Police HQ for the arrest booking process.

tpdnews
Posted by MBTA Transit Police at 9:59 AM