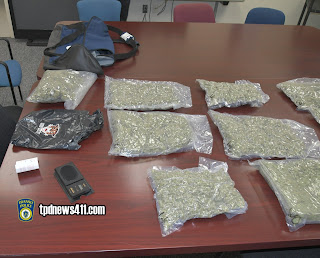 On January 9, 2020 at approximately 3:16PM Transit Police officers assigned to the Central District were on patrol at the MBTA's South Station Bus Terminal. While there they were approached by a concerned employee at the Bus Terminal of a very pungent odor of marijuana coming from a particular travel bag located near the Concord Coach Bus lane. Subsequent to an investigation officers discovered the bag contained just over 10 pounds of marijuana and a scale. The owner of the marijuana, Steve Theard, 36, of Brooklyn, New York was placed into custody for Possession with the Intent to Distribute. Theard was transported to Transit Police HQ for the arrest booking process.

Posted by MBTA Transit Police at 11:35 AM