On October 6, 2016 at approximately 7:50AM a Transit Police officer working a detail at the MBTA's Government Center station was notified by an MBTA employee there was a male, later identified as Isiah Chaffon, 19, of Boston on the Blue Line platform possibly in possession of a firearm. The T employee further reported the male appeared to be unconscious and was slumped/sitting against the wall. The officer immediately responded to the area and observed Chaffon who appeared to be in a unconscious state sitting against the wall with the barrel of a firearm protruding from his waistband. 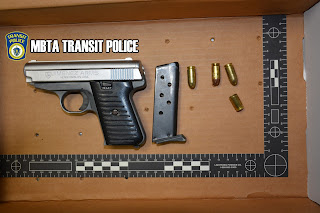 The officer quickly took possession of the firearm, a 380 caliber handgun with 3 rounds in the magazine, and was able to rouse Chaffin from his unconscious state. The officer determined Chaffin did not have a License to Carry a firearm and he was placed into custody and transported to Transit Police HQ for the arrest booking process. During the booking process it was discovered Chaffin had several warrants in existence for his arrest issued from Roxbury, Chelsea and Newton District Courts. Additionally, Chaffin was in possession of  controlled narcotics without being duly prescribed to him.

the events listed above are allegations; All defendants are presumed innocent until and unless proven guilty beyond a reasonable doubt
tpdnews
Posted by MBTA Transit Police at 11:23 AM