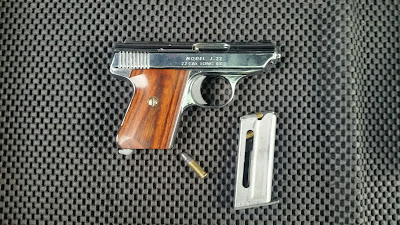 On March 20, 2016 at approximately 4PM Transit Police officers assigned to the Central District were monitoring the large crowds passing through South Station as a result of the Saint Patrick's Day Parade in South Boston. While there they received a radio call for a fight in progress on the Red Line platform. Officers immediately proceeded in that direction and were approached by two witnesses who appeared frightened. The witnesses reported a male was armed with a firearm. Apparently the male was asking other passengers if they wished to purchase illicit narcotics and at one point bent over and a firearm fell from his waistband. The witnesses provided a description and last known location. Officers were able to locate the male, later identified as Nichola Cossette, 25, of North Attleboro on the far end of the platform and seized a loaded .22 caliber handgun from his possession.

Cossette was placed into custody and transported to Transit Police HQ for the arrest booking process. It is expected Cossette will be arraigned sometime today in Boston Municipal Court- Central Division for Carrying a Firearm w/out a License and related charges.