Boston man arrested for unlicensed possession of a firearm.

On January 21, 2023 at approximately 4PM Transit Police officers assigned to the North District received a radio call for an unknown male trespassing on the right of way at the MBTA's Wellington Station. Upon arrival the officer encountered the male that was alleged to have trespassed on the right of way, later identified as Joshua Chavez, 21, of Boston. Officers engaged Chavez in conversation and he admitted to being on the right of way. Based on the officer's observations of Chavez during this encounter the officer subsequently recovered a loaded 1911 firearm, hammer cocked with a bullet in the chamber, from Chavez' waistband. Chavez was subsequently booked at TPD HQ for unlicensed possession of a loaded firearm, unlicensed possession of ammunition and possession of a Class A substance-to wit Heroin. 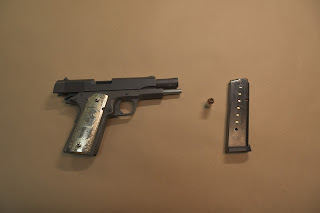 Posted by MBTA Transit Police at 9:34 AM