Serial Grafitti Vandal at it again. 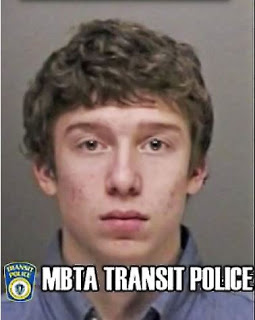 
In 2015 Transit Police announced the identification and arrest of a serial Graffiti Vandal who defaced numerous MBTA stations as well as City of Boston property (see posting here). MARC MEADOWCROFT, 20, of Revere ultimately entered a Guilty Plea in Boston Municipal Court and was given an 18 month suspended sentence on particular charges and a Continuance w/Out a Finding on others.

MEADOWCROFT agreed to cease his criminal conduct of vandalism on MBTA property and in doing so remained free from jail. 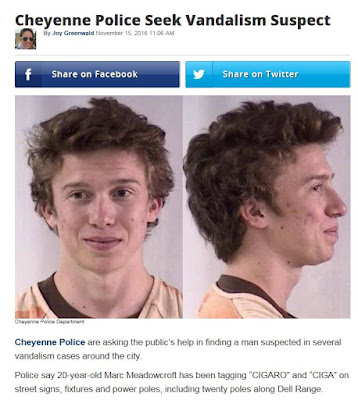 Unfortunately, MEADOWCROFT did continue his criminal ways of vandalism. In January 2016 MEADOWCROFT yet again defaced MBTA property at Green Street station with his familiar Tag name of "CIGA". MEADOWCROFT was also captured on our public safety cameras system engaged in this criminal act. Currently there are several warrants in existence for MEADOWCROFT'S arrest for Graffiti related activity. MEADOWCROFT is being actively sought by Transit Police. If you know the whereabouts of MEADOWCROFT and/or have information on his whereabouts we would like to hear from you. You can contact the TPD and remain 100% anonymous via our Text a Tip Line 873873, our SeeSay App or by calling 617-222-1170.

Vandalism to MBTA property is costly to all of us. The TPD will dedicate resources in identifying, locating and arresting those who engage in such activity.

the events listed above are allegations; All defendants are presumed innocent until and unless proven guilty beyond a reasonable doubt
tpdnews
Posted by MBTA Transit Police at 3:36 PM