On September 16, 2015 at approximately 9AM, Transit Police officers assigned to Area 1, received a radio call to respond to the MBTA's Back Bay station for a report of a man on an Orange Line train wearing a mask and making threatening statements. Upon arrival the officers were approached by an unidentified witness who provided a description of the male subject and stated he made a reference to "blowing the train up". This allegedly occurred on the train while traveling between Downtown Crossing MBTA and Tufts Medical Center MBTA station. 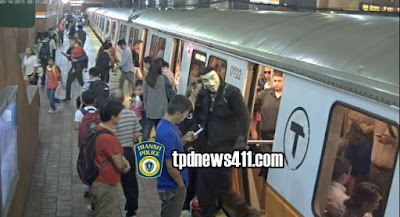 Officers conducted a search for the subject to no avail. A review of the MBTA's public safety camera system located the offending male as he exited the Orange Line train and confirmed the statement provided by the witness. Transit Police officers continued to actively search the downtown Boston area for the subject when at approximately 11AM TPD officers located the offending male, later identified Joseph Johnson, 30, of Boston on Washington Street just outside Tufts Medical Center MBTA station. Johnson was placed into custody and is expected to be arraigned sometime tomorrow in Boston Municipal Court-Central Division for Making a False Bomb Threat.

Lieutenant Richard Sullivan stated, " we take incidents such as these with the utmost urgency and seriousness. Our number one priority is the safety and security of our patrons and employees. We will work with the Suffolk County District Attorney's Office to ensure Johnson is held accountable for his actions. A clear message must be sent; behavior and statements such as exhibited by Johnson will not and cannot be tolerated on the MBTA. We apologize to anyone who may have been inconvenienced by this mornings incident ".   LT.Sullivan further added, " at no time were our patrons and employees in danger from Johnson's alleged threat".


media inquiries should be directed to Lt. Richard Sullivan at rsullivan@mbta.com


The events listed above are allegations; All defendants are presumed innocent until and unless proven guilty beyond a reasonable doubt
Posted by MBTA Transit Police at 3:28 PM